Exchange in Milan, questions without answers

Exchange in Milan, questions without answers

Exchange – It is like falling in love and knowing it will end before it had a fair chance to start. It is both beautiful and heartbreaking.

Have you ever felt homesick for a city you currently live in because you know you’ll have to leave it way to soon? Should you stop the time and regret the future now so the end won’t be that painful? Or should you enjoy fully and go for a bitter, sudden and unexpected end?

I don’t know. I don’t even know if it’s about the city or the people currently living here.

With which one of these people would you identify with?

Some might say that if you move with the idea of staying you’re able to fully commit to the city. But if you know you’ll leave you might truly give the city all you’ve got for as long as it lasts. And, if you never move, why wouldn’t you fully commit?

A friend once told me he couldn’t understand why I would go on exchange and move to a place where I didn’t know anyone. He told me that in Rotterdam he had all he wished for and didn’t want to leave. I fell silent, I couldn’t grasp that thought. I’ve lived in five different cities, changed schools more times than I have fingers and not once did I think; ‘what if?’

If there’s something I strongly believe in, it is that there’s always people worth to listen to, wherever you go. And if you think otherwise, force yourself to listen sometime and I assure you, you’ll be amazed.

Someone here told me that if you go on exchange you get the chance to take of your mask. Isn’t that an astonishing thought? She said that to move is to have a new start. No one knows you, no one cares about your past and thus you do not have to worry about some kind of reputation. You can be truly yourself.

The question is, what do you do if you go back? Would you pick that mask up again and wear it or would you just leave it?

I don’t know. Maybe I’ll leave it here in Milan. 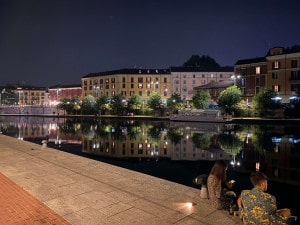